In these trying corona times, all of us should #stayhome as much as possible. Easier said than done. Did you already binge-watch everything and are you looking for a fresh dose of inspiration? Watch something with a self-driving car in it!

We’ve been dreaming about that self-driving car for quite a while now: those other roaring twenties already entertained the idea of some sort of jumbo-sized remote-controlled cars. And in the sixties it was also a hot topic, next to electric cars and circulation plans.

So it’s no surprise then, that there are many examples of autonomous transport to be found in popular culture. Examples that show that we not only dream of self-driving cars, they also give us nightmares. But not to worry, most of the depictions we found are actually fairly casual. And we left out the spoilers as much as possible, enjoy!

It’s fast-forward to a world full of robots in this animation film, which paints an interesting picture of both the advantages and disadvantages of all that technology. A letter box that runs after you when you get home, whilst screaming the new messages at you? No gracias!

When it comes to the nice technological inventions, first prize goes to the autonomous cars that are depicted. Mom and daughter (main character) are having a vivid discussion, while mom – with her back to the windscreen in a swivel chair – swipes through an online catalogue. Meanwhile they are being transported to their destination completely automatically. More quality time through autonomous transport? Yes, please!

Yep, already in 1966, an autonomous Batmobile drove onto the big screen. When Batman and Robin are in danger, Batman activates the automatic-driving-mode on his car. It promptly drives towards the ideal spot to pick up its owner, while also deploying a safety net to catch the passengers, who have been thrown into the air. Oh, and the car also brakes for children who are crossing the road without paying attention to traffic. A blazing example! 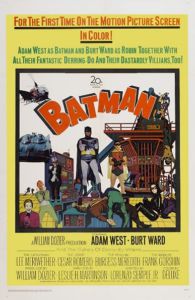 This short anime series – with anthropomorphised animals – shows the daily struggles of a red panda with a challenging (more like: annoying) office job. She lets off steam about her wretched superiors and the endless piles of administration in private karaoke sessions. She meets a tech developer who has designed his own AI, which includes autonomously driving his limousine/mobile living space. He believes that technology should rid the world of annoying jobs, like having to drive other people around. Not to take people’s livelihood away, but to give them the opportunity to use their time more meaningfully. Amen to that! 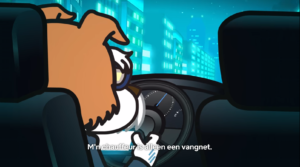 A Doctor Who episode about aliens who – as always – want to exterminate all humans on Earth. This time by using a GPS that can also be used to emit a poisonous gas. People who start to suspect something are parked in the deep end of a pond by the central command system. Autonomous driving, yes, positive impression, no. This episode reflects people’s fear to lose the manual control of their vehicle. And not being able to get it back in emergencies, like when your car is actively trying to drown you. Creepy, for sure: 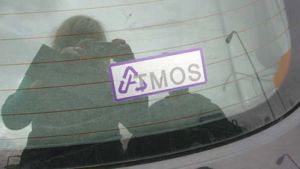 Takes place in 2084. In the autonomous taxi (“Johnnycab”) that is shown in the film, there is an actual humanoid robot behind the wheel. It’s not the friendliest of robots in this case (let’s be honest, not all cab drivers are little rays of sunshine either), but this could be a reassuring concept to some people. The car isn’t a completely unrecognisable pod zooming around on the highway, but a simple car with a humanlike robot behind the wheel: https://www.youtube.com/watch?v=eWgrvNHjKkY 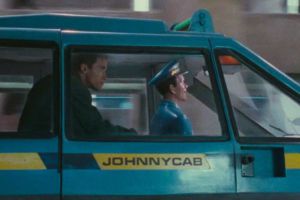 In this film, law enforcement can arrest murderers before they commit their crime. The film takes place in 2054 and contains a pretty literal example of what we nowadays imagine autonomous cars to look like. They are shiny pods with the aerodynamic qualities of a bullet, shooting back and forth over the highway. A negative portrayal of the car is also included, when the car of the main character suddenly changes destination without his consent. That makes this another reference to the fear of losing all control over a car.

Watch the film, or check the compilation of the autonomous car heeere (spoilers ahead): 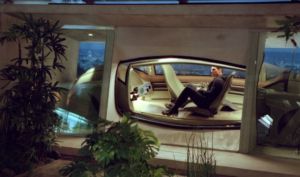 This episode doesn’t involve autonomous transport as such, but something that has to do with it: who does an autonomous car sacrifice when having to make the choice between two possible victims? Does the passenger die to protect the other road user? Do we sacrifice one pedestrian to save 4 passengers? Do we swerve towards the elder cyclist to avoid the kid on a bike? This dilemma is a variation on the famous trolley problem. In The Good Place, the trolley problem is exemplified in a horrifically hilarious manner. The characters end up in a simulation with a real tram and real people, in which they have to decide for different scenarios who is crushed and who gets to live. More about this episode and the ethical decision-making process of autonomous transport here! 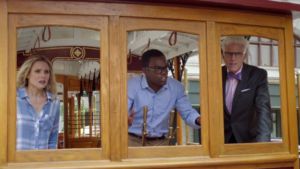 In this film by Studio Ghibli, two sisters move to the countryside to be near their ailing mom. There’s enough distraction for them there, since the nearby forest is full of special creatures. Among which – we’ll pause for a minute so you can read this correctly – a bus which is also a cat! Or a cat which is also a bus! It’s however you want to look at it, really. The cat stops punctually at every bus stop and easily adjusts to the changing conditions while on the road. It doesn’t become much more autonomous than this!

But what we really mean by this, is that we have reached the end of this article. Because magic cars of course don’t count (we wish!).

P.S. If this is how you found out about the Ghibli films, you’re welcome! Send us a thank you note once you’re done watching them all back-to-back. 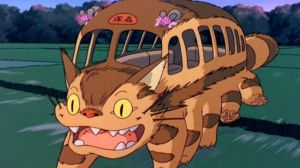 Help us complete this article! Know any fun examples of autonomous transport in film, series or other pop culture? Let us know!

This article is brought to you by A Tribe Called Transport, our youth community.