Home › Blog › Behind the scenes of the rebranding

Behind the scenes of the rebranding

Caroline, Sophie and Marco give you a glimpse behind the scenes of the name change from Taxistop to Mpact. Months of work, creativity, and some headaches. But in the end: a great success. Dive with us into the world of blue triangles, augmented reality and postal parcels!

Was involved in the project from the beginning and was the lead on the branding part. 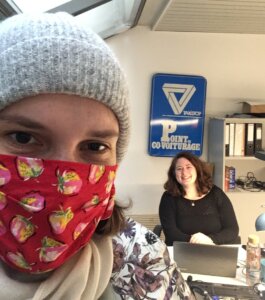 “The new name got chosen very soon after I started working at the organization. I was appointed to follow up everything that came after it: new logo and branding, brand architecture, helping to apply our new branding consistently to all kinds of things, like our new website,… Luckily I had Marco and Sophie to take care of all the things that came on top of that. One of my favourite things about the project was that close collaboration with Sophie and Marco, it was great!” 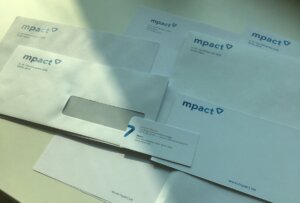 “And then further down the process I also enjoyed seeing the new logo and colours come to live. I felt strongly from the moment I applied with Mpact that some things in their branding didn’t quite do them justice anymore (on top of the “taxi” reference). So I’m really grateful to brand experts MOQO for crafting this beautiful branding with us.”

The lockdown effect for Caroline

“We were lucky to only go into lockdown after we had already decided those delicate things like the final colours. I’m very grateful to the many random colleagues at the office (from the accountancy team and from partner organisation Autodelen.net included), who functioned as a sounding board for me and the many small decisions that came with that process.”

“It’s what I missed most during that strict first lockdown: having a place to hang things on the wall and being able to take a step back to ask other people’s opinion.”

“In general the project could be quite isolating at times. Especially after corona hit, but before Sophie and Marco joined, it could feel bizarre to be the only one hammering out this project day after day.” 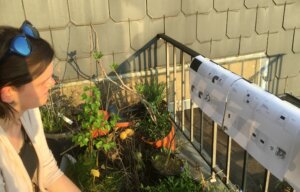 “So it’s very nice to return to all the big and small communication things that the teams come up with. Some of the newer colleagues have only ever known me being busy all the time wrangling blue triangles into place… The whole thing did help me learn an awful lot about graphic design though. Which in turn made it a lot easier to communicate with graphic designers, like our cambio Belgium colleague Lise, who did an awful lot of work for us!”

A long, winding road with lots of obstacles 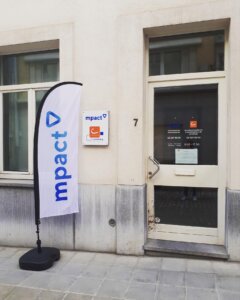 “Weirdly, one of the most difficult parts of this project were the business cards. Because there were a lot of details that had to be gathered, decided upon and streamlined organisation-wide. It all seemed like a lot of project management work for a very small thing. But the decisions that were made with those cards, served us well to consistently write our info like that everywhere. And the business cards? We still haven’t been able to use them due to corona, but we treasure them as part of our new name. Right? Everyone?” *crickets*

“All in all, if you look back, it was a long road to get to the end result. You don’t just change an organisation’s branding and you don’t just change an organisation’s name, especially one that has been around for several decades, without running into obstacles. But the end result and the feedback we get, makes it so that we can look back at this very special project and be proud. Not just of the result but also of each other and the way we worked together to make this happen.”

The experience for Caroline in three words: marathon, identity, support

Worked on many different things for the rebranding and was the lead for creating the video. 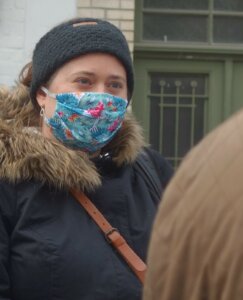 “I started with Mpact – then Taxistop – in October 2020, so the Mpact project was a great way for me to get to know the organization and my colleagues. My closest colleagues for the project were my communication colleague Caroline, and Marco, my project colleague. The three of us each were lead on our own, overlapping parts of the project, and we worked together really well, so that was fun.

But I also got to know the project workers in Gembloux, Brussels and Ghent that I normally wouldn’t have worked with so soon. Or even would have seen, since we all had to work at home because of the pandemic. Homeworking wasn’t easy and the project allowed me to sometimes get out of the house and meet people ‘in real life’.” 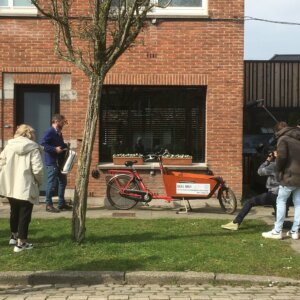 “Preparing for that video shoot was one of the hardest things for me during the project. I had to convince colleagues to feature in the video, then juggle locations and props and people, all whilst keeping social distancing in mind. But the shooting itself worked out great and I was happy to see the colleagues in the video, it makes it a lot more fun and authentic.”

You can watch the result here!

“The reason why creating the video went well is because we worked together with Wannes and his team from Poppr. It was really nice to see how they handled all the technical stuff, like the augmented reality that made our logo ‘move’ on the beer bottle. I worked together with Wannes every day for three months, so at the end of the project it was weird to say goodbye and suddenly not have that contact anymore!”

No idea what we’re talking about with augmented reality? Check it out here 😉

The take-away for Sophie

“One thing I learned from this project is how to plan my work in the long term. My previous job was as a journalist. I started my ‘project’ every day and it was finished that same evening. Then it started all over again the next day. There simply were no long-term projects for me, so this project was very long in comparison. There were moments of calm and moments of rush-rush and I learned how to find a balance between those two.

What wasn’t easy was planning for all these new tasks that I had never done before. It was fun to do new things! But I couldn’t always estimate how long one particular part of the project would take to complete. I also wanted everyone involved – and there were a lot of people involved – to be 100% happy with each little thing in the project, but I realised that’s not possible. In the end when it all came together, we had a great result and great feedback, and that’s what matters.” 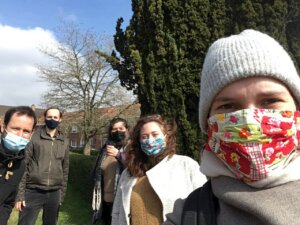 “So all in all it is a very nice accomplishment with the whole team. I enjoyed getting involved in things that normally wouldn’t have been such a big part of my job, like augmented reality and lots of storytelling. Looking back, it really is a big, special project.”

The experience for Sophie in three words: challenge, colleagues, cooperation

Was the coordinating project manager and was lead on working out the packages sent to partners. 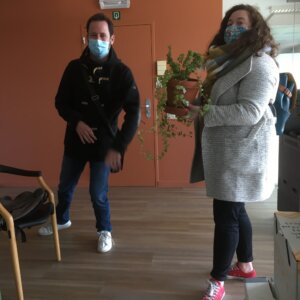 “For the rebranding project I worked on two big things: I started off as the project manager who had the helicopter view for all the different parts of the project and later in the process I became the lead for sending our celebratory package with a beer to partners.

“I usually don’t do anything related to organising events, managing a lot of deadlines and logistics etc, so that was a nice challenge for me too.”

“I really had to settle into the role of being the person who oversaw the complete puzzle. I suddenly had to tell colleagues not to miss deadlines, I had to communicate well with a lot of different parties (also external ones), take all the different opinions into account and most importantly… not forget a single detail in the whole project! But once the whole rebranding machine was launched, everyone’s roles became clearer and all the different parts – like management, communication, graphic design, logistics – started to come together.” 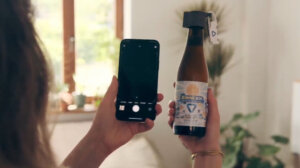 The challenge for Marco

“Of course corona had an impact. For one, we had to do the whooole thing via video calls. And we had to find an alternative for a party to celebrate our new name with our partners. That became the idea of sending people a bottle of beer that was linked to a video about revealing our new name. So people could celebrate with us as they found out the new name.

For me, overcoming the constraints of corona because of the superb collaboration between the different parts of our organisation was really inspiring. I think we can learn from that for future projects. I myself learned a lot about communication, like graphical design. I’ve also never seen a video being shot and it was really impressive to see what Poppr did, all very professional.”

The feedback we received was really good. We can be proud of what we did. The real return won’t be visible for a bit longer I think. It takes time for a name change to take hold, but I think even in the future we’ll see we did well. It’s cool that Mpact keeps innovating, not only for mobility, and for the corona situation, but also for its own name!”