In October 2018, Mpact asbl and Autodelen.net, in collaboration with 13 European partners, responded to an INTERREG NW call for projects. The project was approved in January 2019. In collaboration with cities such as Leuven, Amsterdam, Manchester and Nijmegen, the project plans to develop electric mobility hubs.
The eHUBS project aims to reduce private cars use by promoting and deploying physical clusters of shared, sustainable and electric mobility services in seven cities of North-West Europe. eHUBS can vary in size and type of location and they bring together electric bicycles, e-cargo bikes, e-scooters and/or electric cars. A wide uptake of eHUBS will support the transition towards more sustainable transport in cities, by contributing to reducing air pollution and congestion in cities.

A blueprint guide will be produced to replicate experiences in other European cities and regions. Finally, a communication programme will also be set up to raise public awareness.

Among its missions, Mpact will promote the concept of “Point Mob”/”eHUBS”  in Wallonia and Brussels, with a regional aspect of dissemination and a specific attention to local specificities, building on the Flanders and other partner’s experience and knowledge. Mpact will support and work in collaboration with cities interested in implementing Point Mob/eHUBS concept (“replication cities”).

In 2021 a capitalisation was approved. As part of this capitalisation, Mpact will further develop the TOMP-API, a standard for exchange of data between operators and MaaS-platform. The project was also extended with new partners in Ireland, Scotland, Flanders and Wallonia. 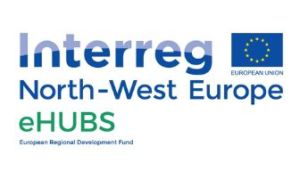